Recently i ran into RAM troubles on my vserver for some reasons, i encountered the evil:

So first i suspected mongodb to use up loads of memory as top showed.

But after some recherche work i learned mongodb only -seems- to use a lot of memory.
see here and here and here
The actual usage was around 20mb RAM, so mongodb was innocent.

The true RAM monsters were some apache and php-fpm zombies, but thats another story.

While suspecting mongodb i thought about outsourcing the mongodb and i found a free and sufficient offer in mongolab.
My interests were on and i gave it a try.
The free version has a limit for up to 240MB storage and since my app is just a small counter it should last for some time.

The registration was easy, creation of the database aswell and the administration panel is also pretty cool and informative. 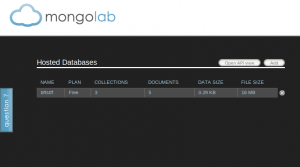 Then create a user and migrate:

Then fetch it to my local machine:

Ups i didnt had no mongo client on my local machine, go get it:

Now connect to the mongolab via your console

Now import the dumps to continue the counter there were i stopped.

Then teach the php app the new connection:

There you go! The counter is storing its stuff to the mongolab database.
And i can stop the mongod on my machine and free some memory.

2 Replies to “Migrate to Mongolab”

We use cookies on our website to give you the most relevant experience by remembering your preferences and repeat visits. By clicking “Accept”, you consent to the use of ALL the cookies.
Cookie settingsACCEPT
Manage consent

This website uses cookies to improve your experience while you navigate through the website. Out of these, the cookies that are categorized as necessary are stored on your browser as they are essential for the working of basic functionalities of the website. We also use third-party cookies that help us analyze and understand how you use this website. These cookies will be stored in your browser only with your consent. You also have the option to opt-out of these cookies. But opting out of some of these cookies may affect your browsing experience.
Necessary Always Enabled

Performance cookies are used to understand and analyze the key performance indexes of the website which helps in delivering a better user experience for the visitors.

Analytical cookies are used to understand how visitors interact with the website. These cookies help provide information on metrics the number of visitors, bounce rate, traffic source, etc.

Advertisement cookies are used to provide visitors with relevant ads and marketing campaigns. These cookies track visitors across websites and collect information to provide customized ads.

Other uncategorized cookies are those that are being analyzed and have not been classified into a category as yet.